Did you know that the word “doily” comes from a man with the last name of “Doiley”? He lived in London in the 17th-century and was a “draper”. In those days, drapers were cloth merchants. He introduced some materials that were intended for summer including some for small, fancy dessert napkins. They were so popular that they were called “doiley napkins”, then just “doilies”. Over the years the word doily has been spelled many ways including “doiley”, “doilie”, “doyle” and “doyley”.

Dolies were also used in times past to wrap the stems of “posies” or “nosegays”. They were formal flower arrangements given as hand-held gifts. Even today you can see old cards or prints from Victorian times in which there’s a posy wrapped in a doily.

We all know about how doilies used to be used for furniture protection. They helped prevent scratches to wood surfaces and could be starched into frills. They also helped protect upholstered furniture. The financial rigors of the Depression plus the rationing of cloth during WWII necessitated protecting the fabric already on sofas and chairs. We have to remember, too, that the hair styles for men during part of those times included oils and pomades…think George Clooney in “Where Art Thou Brother?” and his “Dapper Dan”. Technically, doilies used on upholstery are called “antimacassars”.

During this time girls, and sometimes boys, were often taught how to crochet. They may have learned from older family members even in school. It was a skill that was considered important to know. A lady might frequently take her crochet work in her bag when going out. Many were made during lunch breaks at defense plants or while waiting for public transport.

Doilies fell out of fashion and design favor sometime after WWII. We tend to think it was because of their use during hard times and because sometimes we have an instinct not to like the things from the previous generations. Our own tendency, in a rushed world, to prefer minimalism may contribute to a sense adverse to anything lacy or complex. Today too many doilies are in thrift shops or in left-over boxes at estate sales. Sometimes they get misused under the label of “re-purposing”.

We think they should be brought back. They are simply beautiful in the center of tables. They look fabulous with edges gracing fireplace mantles or on shelves holding antique dishes. They can be framed as beautiful art. There are plenty of books and magazines with patterns for vintage designs. Patterns can also be found online, including at auction sites. It’s easy, too, to find old pattern books at yard sales and at used book sales.

Here are some examples of new doilies made by our readers. We hope they inspire you. Thanks go to Diane, Mary and Lori for sharing them with us. 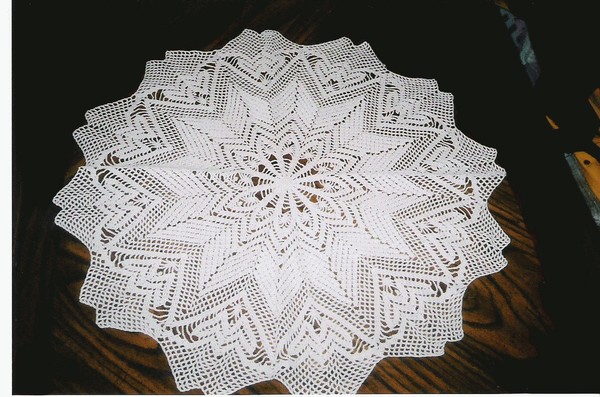 from: Mary Kucera Roberts LeClerc: “Doily I made for one of my granddaughters as a wedding present.” 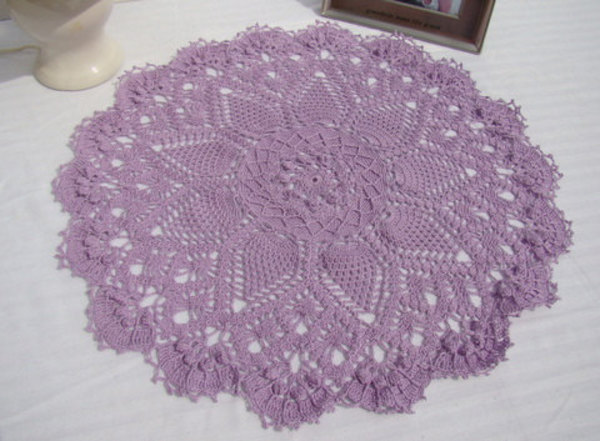 from: Lori Ouellette: “One of my favorites! Lilac sunburst ;-)” 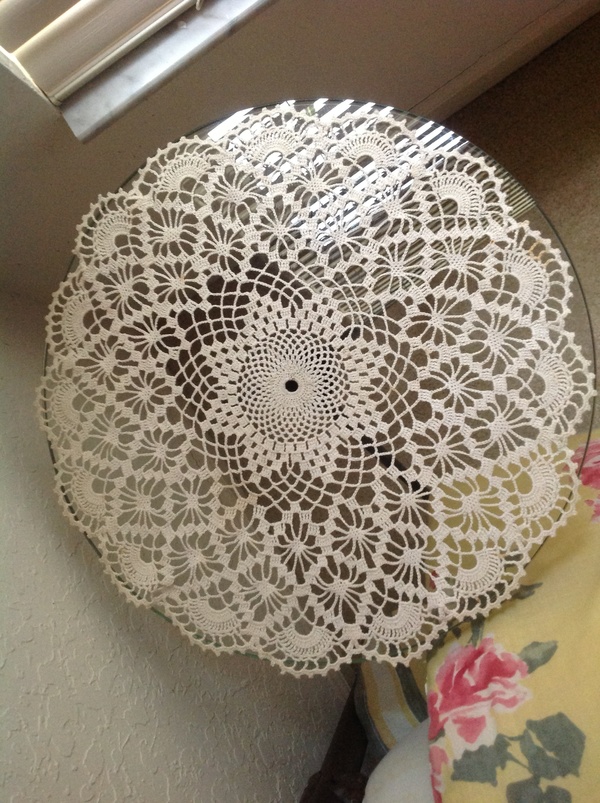 from: Diane Mancini-Erster: “Done by my mother Edith some 70 years ago, she would have been 94 years old. She taught me & I continue using some of her wonderful patterns I in turn have taught my niece.”